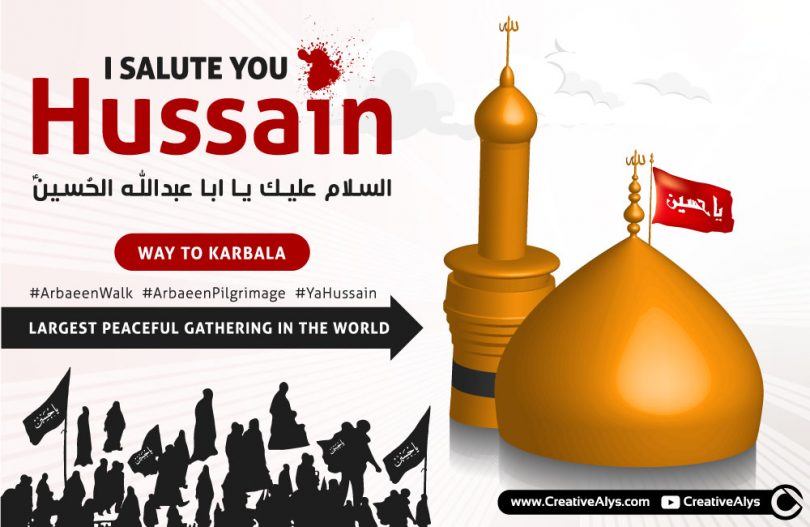 The Arbaʽeen Pilgrimage, or the Arbaʽeen Walk, is the world’s largest annual public gathering that is held every year in Karbala, Iraq at the end of the 40-day mourning period following Ashura, the religious ritual for the commemoration of martyrdom of the grandson of Islamic Prophet Mohammad and the third Shia Muslim Imam, Hussain ibn Ali. Hussain was a 7th century revolutionary leader who made the ultimate stand for moral justice. His legacy inspires millions to fight against injustice. Hussain gave everything he had for the dignity of his society in the face of corruption – forever changing the course of history. Today, his selfless stand gives hope to people of all backgrounds. Anticipating Arbaʽeen, the pilgrims make their journey to Karbala on foot, where Hussain and his companions were martyred and beheaded by the army of a tyrant Yazid in the Battle of Karbala.

The number of participants in the annual pilgrimage reached 25 million or more by 2016. On the routes of the pilgrimage, food, accommodation and other services are provided for free by volunteers.

Hussain is believed to transcend all cultural boundaries and be a symbol of universal freedom and compassion.

“Shia cities, towns and villages all over Iraq empty out” during the 20-day period of the pilgrimage “as their people take to the roads in an elaborately organised and well protected mass movement not seen anywhere else in the world”. The mood of the pilgrimage has also been described as “one of intense piety and communal solidarity”. The pilgrimage is marked by long walks from Najaf to Karbala. Some of the pilgrims make their journey from cities as far as Basra, about 500 kilometers (310 mi) away by road. People from different walks of life, ethnicity and sect participate in the march including toddlers in prams and elderly pushed in armchairs.

During the pilgrimage “copious supplies of food, small clinics and even dentists are available for pilgrims and they all work for free.

The care of pilgrims is regarded as a religious duty.” Along the roads to Karbala, many mawakibs (tents) are devised with the aim of providing “accommodation, food and beverage and medical services”, and practically anything else the pilgrims need for free.

The black flag of mourning for Imam Hussain is the most common among flags carried by the pilgrims. They also decorate “permanent brick buildings and temporary tents which are used for praying, eating and sleeping along the three main routes leading to Karbala”. Seven thousand of such mawakeb were set up in city of Karbala in 2014.

What is interesting about this human crowd is that all society segments take part in it. Despite its religious character, nonreligious people also participate in it, in addition to illiterates and holders of high academic degrees, and ordinary people and leaders of the country.

Arbaʽeen pilgrimage has truly become a manifestation of unity and brotherhood within Muslim community so much that even followers of other religions have been drawn to it and attend the ceremony alongside Shia Muslims.

Arbaʽeen should be listed in the Guinness Book of World Records in several categories. The biggest annual gathering, longest continuous dining table, largest number of people fed for free, largest group of volunteers serving a single event, all under the imminent threat of suicide bombings.

Here is an amazing vector artwork featuring the way to Karbala at shrine of Hussain Ibn Ali marking Arba’een 2020 available in vector AI and SVG formats for all. Grab this remarkable vector artwork now and feel free to use and share it. Also don’t forget to check out our design shop for more great resources. Subscribe to our YouTube Channel to get more amazing stuffs and useful information.