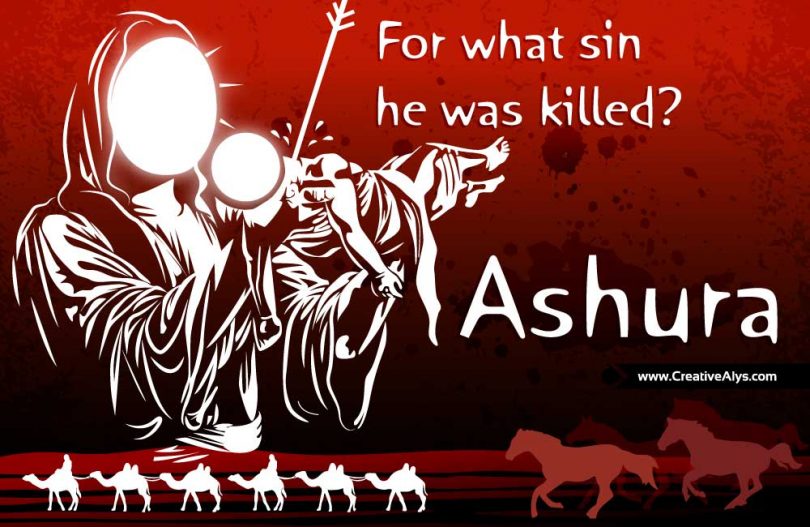 Ashura marks the death anniversary of Hussain ibn Ali, a 7th century revolutionary leader who was killed in the Battle of Karbala. The Day of Ashura is the tenth day of Muḥarram, the first month in the Islamic calendar and is recognized by millions across the world to remember Hussain’s dignified stand for social justice.

Hussain’s camp at one time was cut off from water supplies from 7th moharram till Ashura. Hussain had brought along Ali Asghar for mercy, but Yazid’s soldiers then martyred Ali Asgher by a three-headed arrow to his throat. Ali Asghar was only six months old when he died. He is honored as the youngest person martyred at the Battle of Karbala.

The Day of Ashura is mourned and remembered by millions of people across the world as the day Hussain and his supporters were killed in The Battle of Karbala. Today, pilgrims from all across the world visit the shrine of Hussain ibn Ali in Karbala where he is buried, to pay their tribute to his courageous stand.

Here is a vector illustration portraying a moment from the Battle of Karbala on the day of Ashura when Ali Asgher was killed by an arrow. The files include vector AI and SVG. Grab it now and feel free to share it. Also don’t forget to visit our design shop for more great graphic design resources. Subscribe to our YouTube Channel to get more amazing stuffs.

How To Fade (Feather) Edges In Illustrator | Tutorial

Subscribe to our newsletter and never miss the latest free graphic design resource or an exclusive offer.