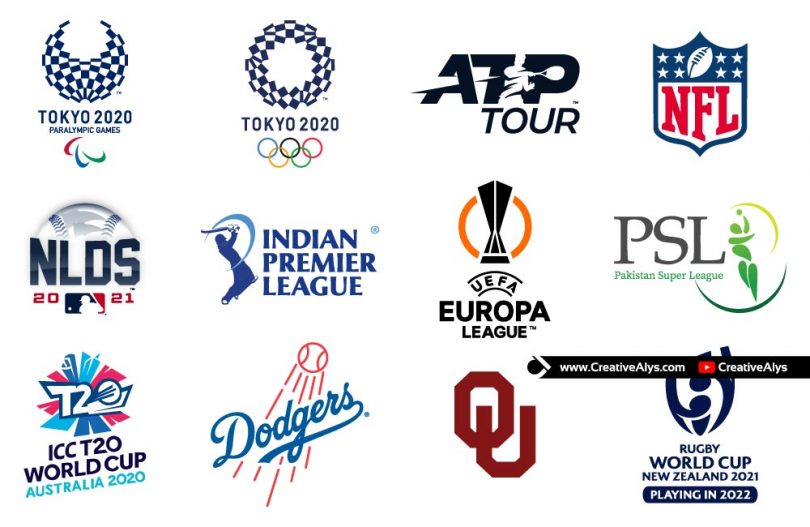 Sports are part of our daily life that aim to use, maintain or improve physical ability and skills while providing enjoyment to participants. Sports can, through casual or organized participation, improve one’s physical health. Hundreds of sports exist, from those between single contestants, through to those with hundreds of simultaneous participants, either in teams or competing as individuals. Here, I am featuring some famous sports events/teams logo designs in vector format for the creatives. These sports events are scheduled to be held in the year 2020-21 during the tough situation of Coronavirus pandemic. The creative logos include:

The Summer Olympic Games are a major international multi-sport event normally held once every four years. The Games were first held in 1896 in Athens, Greece, and were most recently the 2020 Summer Olympics held in 2021 in Tokyo, Japan.

Since 1960, the Paralympic Games have taken place in the same year as the Olympic Games. The Games were initially open only to athletes in wheelchairs; at the 1976 Summer Games, athletes with different disabilities were included for the first time at a Summer Paralympics.

The 2021 ATP Tour is the global elite men’s professional tennis circuit organised by the Association of Tennis Professionals for the 2021 tennis season. The 2021 ATP Tour calendar comprises the Grand Slam tournaments. Also included in the 2021 calendar are the Davis Cup, the Summer Olympics in Tokyo, Next Gen ATP Finals, Laver Cup, none of which distribute ranking points.

The 2021 NFL season is the 102nd season of the National Football League (NFL). This is the first to feature a 17-game regular season schedule as the league expanded the season from 16 games. The regular season started on September 9, 2021, with defending Super Bowl LV champion Tampa Bay defeating Dallas in the NFL Kickoff Game. The regular season is scheduled to end on January 9, 2022. The playoffs are scheduled to start on January 15 and will conclude with Super Bowl LVI, the league’s championship game, at SoFi Stadium in Inglewood, California, on February 13.

The 2021 Indian Premier League, also known as IPL 14 or IPL 2021, is the fourteenth season of the Indian Premier League (IPL), a professional Twenty20 cricket league established by the Board of Control for Cricket in India (BCCI) in 2007. Mumbai Indians are the two times defending champions, having won both the 2019 and the 2020 seasons. Ahead of the tournament, Kings XI Punjab were renamed as the Punjab Kings.

The 2021 Los Angeles Dodgers season is the 132nd season for the franchise in Major League Baseball, their 64th season in Los Angeles, California, and their 59th season playing their home games at Dodger Stadium. The Dodgers entered the season as the defending World Series Champions, and will attempt to repeat as champions. On September 14, the Dodgers clinched a spot in the postseason for the 9th consecutive season extending the longest streak in franchise history.

The 2021 Oklahoma Sooners football team represents the University of Oklahoma during the 2021 NCAA Division I FBS football season, the 127th season for the Oklahoma Sooners. The team is led by Lincoln Riley, in his fifth year as head coach. They play their home games at Gaylord Family Oklahoma Memorial Stadium in Norman, Oklahoma. They are a charter member of the Big 12 Conference.

The 2021 Rugby World Cup is scheduled to be the ninth edition of the Rugby World Cup for women, to be held in New Zealand in the cities of Auckland and Whangārei. It was originally to be held in 2021, but was officially postponed by a year in March 2021 due to COVID-19. This will be the first women’s Rugby World Cup to be held in the southern hemisphere. New dates and branding for the tournament were revealed on 12 May 2021, with the window being increased from 35 to 43 days, from 8 October to 12 November 2022.

Here, you’ll get these famous sports logos in vector formats AI, EPS and SVG formats for free. Grab this vector freebie now and feel free to use and share it. Also don’t forget to check out our design shop for more great resources. Subscribe to our YouTube Channel to get more amazing stuffs and useful information.

Famous Brands of the World